TNT Transfer Case wanted to share some information  about the different Jeep Transfer Cases available.  Some of this information has been gathered from other Jeep enthusiasts and professional mechanics that want to share their  knowledge. We hope this information can help you determine which transfer case you need and any upgrades that might be available. We hope this might help in identifying the transfer case found on your Jeep Vehicle.

Contact us today with any questions about your transfer case needs

Let’s face it, sometimes SUV’s, 4×4’s and other Offroad vehicles, are a necessary part of life. Use your off road vehicle wisely.  We replace all bearings, seals, fork pads, viscous (when the unit has them) and chains (chains are Morse and only Morse chains). Each Transfer Case is unique and specific to the vehicle. Please locate the identification tag on your transfer case and write down the Model & Assembly Numbers. These numbers are critical in determining the exact transfer case for your vehicle.

All of our rebuilt and new transfer cases come with a 24 month / 70,000 mileage warranty

The NP208 has an aluminum case and an appearance similar to many other chain driven New Process transfer cases. It should have a tag on the back saying New Process Gear Model 208. It is a chain driven transfer case with a 23 spline input and standard round bolt pattern. The output for the front driveshaft is on the drivers side. Low range is around 2.62 and high is 1.00.
Identifying it: Like most New Process transfer cases, the NP208 has a round tag affixed to the rear case half. If the tag is missing, you can easily tell it apart from other aluminum-bodied cases because the rear case half has a smooth exterior with few support ribs. It has a driver-side front output and a larger-diameter tail housing compared with most other models.
Variations: The architecture of the NP208 served as the foundation for numerous other transfer cases. There are many comparable cases out there that share the same visual cues, but do not interchange with the Jeep-specific models. This can be a source of frustration. Also, GM had a version of the NP208 in K-series pickups, Blazers, and Suburbans from ’81-’86. This model employed a similar-looking, yet different circular mounting pattern than the Jeep NP208 and had a passenger-side front output. Ford versions have a driver-side drop. Other versions found in ’80-’87 Dodge Ramchargers, 1⁄2-, and 3⁄4-ton pickups used a passenger-side drop like GM.
Usage: Full size Cherokees used the NP208 from ’80-’83 and the J-trucks used it from ’80-’86 or ’87. The NP208 was the “Command-Trac” option for full size Jeeps during this time period.

Starting at $850 with exchange. 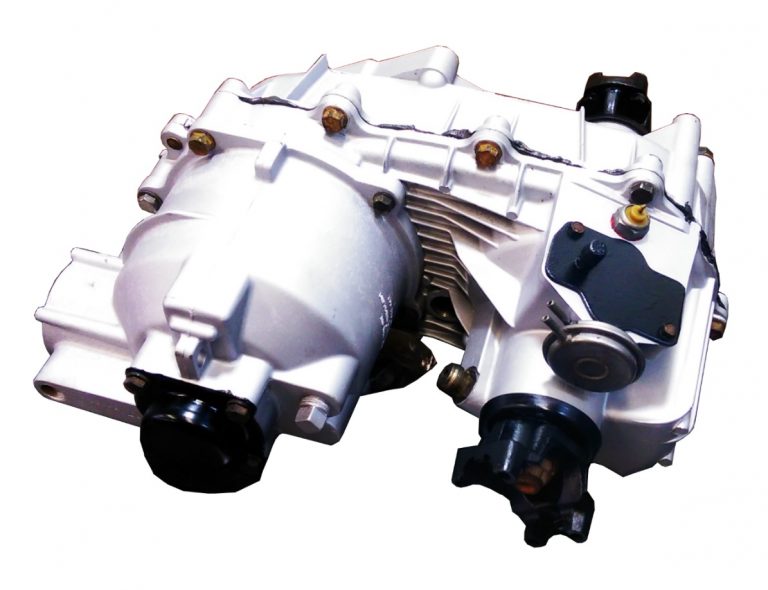 NP228 and NP229: Found in ’80-’84 full-size Cherokees and Wagoneers, the NP228 and NP229 were based on the NP208 and feature the same exterior shell and chain-driven 4WD system. The only difference between the two is found in 4-Hi. On the NP228 the center differential will remain open in 4-Hi while the NP229 has a limited-slip differential to assist with high-range traction. Both units have differentials that will lock 100-percent when 4-Lo is selected and both feature a vacuum-operated center differential.
Featuring chain-driven, planetary reduction in an aluminum case, the NP228 and NP229 have a 2.61-to-1 low range and direct in high. The NP228 had a direct-drive 2wd mode. Using an internal, open differential for four-wheel-drive mode and high range and featured a fully locked mode in four-wheel-drive, low range. It featured vacuum actuation for mode operation and a conventional shift linkage for range operation. This transfer case was used in the XJ Cherokees as the optional in lieu of the NP207.
The NP229 was similar to the NP228, but it features an internal viscous coupling for full-time operation. This transfer case was offered in the FSJ Grand Wagoneer.

Identification
The NP transfer cases are easily identified by the numbering in its red and silver tag on the back. The model number and gear ratio will be listed.

The NP231 has an aluminum case and it should have a tag on the back saying New Process Gear, Model 231. New versions of the NP231 are referred to as NVG231 or NV231 which stands for New Venture Gear. The tag on the back of the transfer case will reflect the name change. Only the name is different. A NV231 HD model is used in some ZJs. Presumably this is a “heavy duty” version for Jeeps with the big V8s.
There are versions of this chain driven transfer case that take 21 and 23 spline input shafts. The 23 spline version is used behind the AX-15 and the 21 spline is used behind the AX-5 and the BA 10/5. The output for the front driveshaft is on the drivers side. Low range is 2.72 and high is 1.00.

Identifying it: Spotting the NP231 is easy thanks to the red and silver tag on the rear half of the case. If the tag is missing, you can also identify them by appearance; they have a distinctive six-bolt front mounting face.

Usage: Since 1988, the NP231 has been the “Command Trac” transfer case used in Cherokees (XJ), Comanches (MJ), and Wranglers (YJ). It has been the “Command Trac” transfer case in the Grand Cherokee (ZJ) since its introduction. The new Wrangler (TJ) continues to use the NP231, but the NP231 used in the TJ has a different tail housing that allows the removal of the drive shaft with out losing transfer case fluid. Both version of the NP231 used in the Wranglers have an over all length that is long for a short wheel base vehicle. This can cause driveline vibration and premature u-joint failure especially for a lifted vehicle

If you own a 21 spline NP231 and you want to swap in a 23 spline transmission, ask us about upgrades. 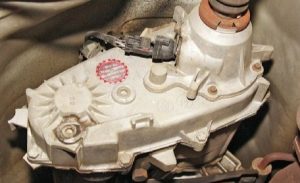 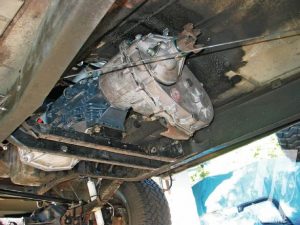 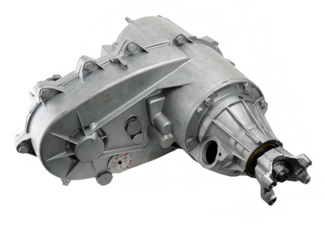 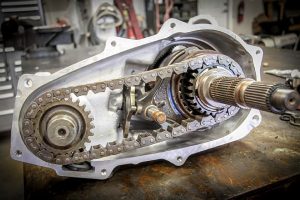 The NP242 has an aluminum case and it should have a tag on the back saying New Process Gear, Model 242. New versions of the NP242 are refered to as NVG242 or NV242 which stands for New Venture Gear. The tag on the back of the transfer case will reflect the name change. Only the name is different.
The chain driven NP242 is a full time transfer case with a 48/52 torque split front and rear. It is possible to lock it into four low so it behaves like a part-time transfer case. When it is locked in, power will be split regardless of traction. The output for the front axle is on the drivers side. Low range is 2.72 and high is 1.00.
Identifying it: The red and silver tag on the rear half of the aluminum case make it easy to spot. If the tag is missing you can also identify them quite simply by appearance. They have a unique-looking case casting with longitudinal ribs surrounding on the input side of the case. You can also tell the NP242 apart from other cases by looking inside the vehicle at the shift indicator. If the indicator has positions for “2WD, 4-part-time, 4-full-time, Neutral, 4-Lo,” it’s a NP242. If the shift indicator makes no mention of both 4-part-time and 4-full-time, it’s probably a different case.
Variations: Aside from the Jeep variant, GM offered a version of the NP242 in the Hummer H1 and H2. The GM models feature a stronger output shaft and a wider chain. The important thing to look for on a NP242 is the spline count of the input gear. The NP242 comes in 21- and 23-spline versions with long and short input gears. A rare medium- length input gear is found on ’93-’95 ZJs with the 46RE or the ’93 ZJ with the AW4 automatic behind the 4.0L I-6.
Found in: ’87-’01 XJ; ’93-’98 ZJ; ’99-’04 WJ; ’02-’08 KJ.

Jeep NP249
This transfer case was manufactured by New Process. This model is a chain driven, The output is on the driver-side with center rear output. The NP249 was used in Jeeps. This unit has been utilized in Grand Cherokee and Grand Wagoneer from 1993 to 1998. The NP249 was manufactured with manual shift, it is a full-time, 2.72:1 ratio, and has a magnesium case has either 4WD full-time, neutral and low 4WD. These units have 23 spline inputs and 27 spline slip rear outputs. This unit has one specific issue, it utilizes a viscous coupler clutch system that can fail. One way to recognize this failure mode is clicking sounds when turning on dry asphalt or concrete surfaces. Viscous coupler failure is attributed to excessive heat build up.

The I.D. tag is located on rear of transfer case near where the driveshaft exits.

These cases came in ’93-’98 ZJ (NV249 Quadra-Trac) and ’99-’04 WJ (NV247J Quadra-Trac II). Each has a full-time 4WD system that automatically biased torque between front and rear axles. For the ’99 WJ, the NP247 “Quadra-Drive II” was introduced. The system used a gerotor pump to proportion torque through an internal clutch setup. When coupled with Jeep’s Vari-Loc axles (WJ only) the entire system was called Quadra-Drive instead of Quadra-Trac II. Unfortunately, NV247s can be problematic and expensive to repair and are not recommended as swap candidates.

The Jeep 241OR has a driver’s side front output and centerline rear output. The 241OR features two ranges; a low range gear that is an impressive 4.0-to-1 (the lowest of all the Jeep transfer cases) and a direct-drive in high range. It features three modes; two-wheel-drive, four-wheel-drive and neutral – for a factory combination of 2H, 4H, N, 4L. Aftermarket modifications allow for the addition of a 2 Low position. 2003-2006 RockTracs feature a three-wire, digital square wave Vehicle Speed Sensor (VSS) on the short tailhousing assembly, in the vein of modern automotive systems. 2007-current RockTracs do not feature a VSS, as speed sensing is relegated to the ABS computer, which in turn relays speed information to the ECM.
The 241OR is very good. They were engineered for durability and simplicity of build – both an advantage to the OEM assemblers as well as individuals servicing them. The NP241OR transfer case has turned out to be great in its strength, gearing, upgradeability and servicability.

Identification
This transfer case is identified by its red and silver tag on the rear of the case. They are also easily identified by appearance. They feature a six-bolt front face.
Though similar in nomenclature, size and configuration to the NP241 transfer cases, this unit has its own case and many unique internal parts. It has a fixed yoke output assembly with an integral electronic speed sensor. The transfer case halves are unique in the overlap of the input assembly required by the larger planetary gears, and the rear half is engineered with generous ribs to handle the increased torque.

In 2003, and in response to the trends of off-roading, Jeep introduced the NP 241OR RockTrac transfer case in the upgraded Rubicon package in the TJ Wrangler Jeep. The 241OR, to date, is only found in Jeep vehicles. 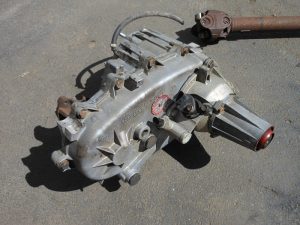 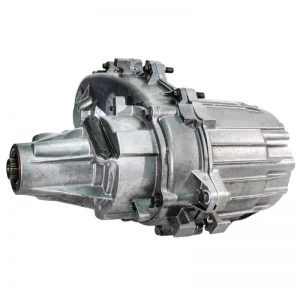 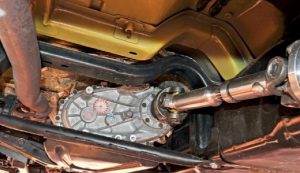